Contents of this article

What is aviation law?

Aviation law is comprised of the laws and rules relating to air travel, air safety and the general use of airspace. In Australia, air navigation and air safety is overseen and regulated by two agencies, Airservices Australia and the Civil Aviation Safety Authority (CASA).

CASA is the primary authority for licensing pilots, registering aircraft and regulating the use of airspace, including those uses forming part of some further space-based activity. Space activities that will be most heavily regulated by CASA include:

Why does CASA need to regulate space-based activities?

CASA’s primary mission is to ensure the safe use and management of Australian airspace. Whilst a space-based operator may only be operating in Australian airspace for a short period, CASA must ensure its use is harmonious and safe with respect to other users at that time, for example, the activities of commercial air carriers.

CASA is also responsible for ensuring that Australia complies with its international obligations of air safety and licensing. Many of the regulations imposed on domestic air users in Australia are reflections of international air safety rules.

The Annexes to the Chicago Convention are observed and administered domestically by various Australian agencies, including CASA. Click here for the full list of these agencies.

SARPs are not binding on member states such as Australia. However, under Article 38 of the Chicago Convention, any member state with alternative rules or regulations to the SARPs must file a ‘difference’ with the ICAO and they are binding in respect of aviation activities in international airspace. Furthermore, compliance with SARPs by an air carrier of one nation facilitates the operation of that air carrier in another nation. Generally, there is a strong impetus to comply with SARPs as far as possible.

The intersection of national and international airspace necessitates the existence of uniform and harmonious civil aviation rules such as the SARPs. Member states rely on these SARPs to ensure uniform implementation of services including Air Traffic Management.

Does CASA regulate all space activities?

CASA does not regulate space activities specifically, rather it regulates the airspace through which those activities are conducted. If a space activity is to be conducted in Australian airspace, CASA will need to be satisfied that it will not jeopardise the safety of other users of that airspace.

CASA provides a comprehensive breakdown of the rules, regulations and permissions required when operating a rocket through its Advisory Circular on Unmanned Aircraft and Rocket.

What type of rocket do I have?

CASA designates any rocket that is not a ‘model rocket’ as a ‘high power rocket’. This means that a rocket will be considered a high power rocket if it contains the following characteristics:

This definition means that the vast majority of commercial rocket activity will involve ‘high power rockets’ and will be subject to the stricter conditions imposed by CASA under Part 101.H of the CASR.

Under the Space (Launches and Returns) Act 2018 (AUS), a high power rocket will not travel beyond a distance of 100km above mean sea level.

What regulations apply to my high power rocket?

In addition to the conditions set out under Part 101.H of the CASR, you will need to receive any relevant permits and approvals from the Australian Space Agency prior to launching your high power rocket.

Requirements under the Space (Launches and Returns) Act 2018 (AUS)

Depending on the type of rocket, payload and location of your launch, you may require the following permits and licenses:

For more information on the laws applicable to launch click here.

Where can I operate it?

A CASR high power rocket may only be operated in an area designated and approved by CASA. Under the Advisory Circular on Unmanned Aircraft and Rockets, CASA recommends contacting your local rocketry club for sites which have previously received high power rocket authorisation.

CASA has strict guidelines regarding appropriate sites for the launch of CASR rockets, including recommendations on suitable types of area.

CASA or Airservices Australia must publish the details of any area approved for the operation of rockets in a NOTAM (Notice-to-Airmen) or on an aeronautical chart. Such approval may be subject to conditions on the operator which must also be published.

If your local rocketry club is not able to assist you in finding a previously approved launch site for high power rockets, CASA advises that a suitable site should be:

CASA designates a minimum area allowable for the launch of high power rockets dependent on the total impulse of the rocket. As these requirements predate the Space (Launches and Returns) Act 2018 (AUS), users should contact CASA to ensure their site meets the designated requirements. 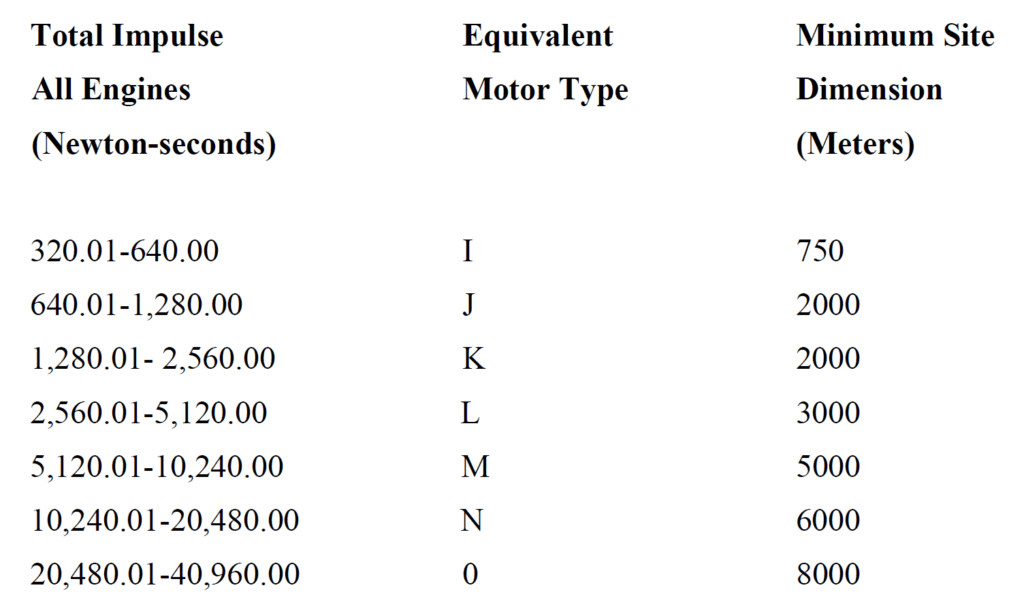 What are the operating conditions for a CASR high power rocket?

In general, and unless in a previously approved area, approval will have to be sought from CASA or Airservices Australia when operating a high power rocket in the following circumstances:

Details of the CASR high power rocket(s) must be given to CASA at least one working day prior to the intended day of launch.

The information must be given in the form set out in sub-regulation 101.445(2) of the CASR.

Are there any prohibitions when operating my high power rocket?

CASA restricts certain conduct during the operation. These restrictions may require more active engagement in the launch of the high power rocket by an operator, they include:

Do I need to register or insure my high power rocket?

CASA does not require you to formally register you high power rocket beyond the information required prior to a launch.

Separately, you may be insured by your local rocketry club’s cover If you choose to launch with them and become subject to their policy.

Users seeking to conduct space activities in Australia may want to use remotely piloted aircraft (RPA) or autonomous vehicles as a part of their launching system. These are classifications of ‘unmanned aircraft’, and CASA is the primary authority in charge of regulating both types of vehicles.

How do I operate an autonomous vehicle in Australia?

At present, CASA has little to no regulation regarding fully autonomous vehicles. However, approval will still be considered on a case-by-case basis, subject to a submission of the safety of the vehicle by the applicant.

Potential operators should contact CASA at rpas@casa.gov.au as early as possible for more information.

If you are operating a multi-stage launch system that includes a remotely piloted aircraft component, you will likely be subject to CASA’s regulations on RPAs. RPAs or ‘drones’ are subject to operating conditions both recreationally and commercially.

What operating conditions am I subject to?

If you are operating an RPA commercially, for a purpose other than fun and recreation, you may need a Remote Operator’s Certificate (ReOC) or a Remote Pilot’s License (RePL). The types of conditions that apply are as follows:

Individuals or organisations that seek to operate an RPA commercially will need an Aviation Reference Number (ARN) as a form of identification for CASA.

For more information on getting a ReOC or a RePL, click here.

If your RPA is under 2kg in weight, you will not need a ReOC or a RePL.
However, you will be required to operate the RPA under these Standard Operating Conditions:

The RPA may not be operated:

Only 1 RPA may be flown per pilot at any one time. If you seek to operate outside of these SOCs, a ReOC and a RePL will be required.

An individual operating an RPA over 2kg will need to have a RePL and be employed by an entity (for example, a university) with a ReOC. Once obtained, you may need permission to fly from CASA.

Unless otherwise approved, operators will need to comply with the following General Operating Conditions:

The RPA is operated:

The RPA is not operated:

Only 1 RPA may be flown per pilot at any one time.

USE CASE: Operating an RPA under 2kg

Robert is an employee of ANGELS Aerospace and seeks to pilot a new 1.5kg drone that will eventually be operated alongside other drones as an experiment for ‘swarm intelligence’ in low-Earth orbit. Robert wants to fly the drone within 25 metres of his colleagues to showcase its manoeuvrability and safety features.

If Robert changes his mind and wants to operate within the SoCs, he will need to inform CASA prior to his commercial flight. Robert may only ever operate one RPA at a time.

Registration and insurance for RPAs

CASA is developing a registration and accreditation scheme for those wishing to operate RPAs recreationally and domestically, however, this is not yet in effect.

The scheme will likely restrict the age of those who may operate an RPA, as well as including an accreditation fee and a compulsory education course. For more information on the scheme, click here.

Whilst CASA does not require insurance for RPAs, it is highly recommended that you get cover for any damage or loss to third parties.

Are the CASR’s consistent with the new Act?

The definition of high power rocket under the Space (Launches and Returns) Act 2018 (AUS) and its Rules are inconsistent with the definition under the Civil Aviation Safety Regulations (CASR) (AUS).

How do I go about launching from an aircraft?

CASA is in charge of regulating the aircraft and the airspace through which it operates. If you are seeking to use an aircraft (not an unmanned aircraft) in assisting a space activity, it would be prudent to contact CASA for further guidance.

What role does CASA have following the creation of the ASA?

Whilst the Australian Space Agency was formed to facilitate and regulate the Australian space industry, CASA still has a significant role in the operation of various space activities.

In general, CASA seeks to maintain safety in Australia’s civil airspace by regulating and restricting the conditions under which unmanned ’vehicles’ using airspace, including rockets, can be operated.

Do I need a license for my Remotely Piloted Aircraft?

If your RPA is under 2kg in weight, you will not need a Remote Pilot’s License (RePL) or a Remote Operator’s Certificate (ReOC) and will be subject to the Standard Operating Conditions.

You will be required to have a RePL and a ReOC (or be employed by someone who has a ReOC) if you:

What to do next?

If you are unsure about the operation of your rocket, including area approvals and certification, contact your local rocketry club.

CASA provides the details for a number of these rocketry associations in Appendix G of their Advisory Circular on Unmanned Aircraft and Rockets.

2. Liaise with CASA on the details of your launch

CASA will require details of the rocket you intend to launch and will need to approve the site you plan to launch from.

3. Comply with the requirements under the Space (Launches and Returns) Act 2018

Your rocket may also be subject to Australian space law and regulations.

4. Follow the High Power Rocket Safety Code during the operation of your high power rocket

Whilst not exhaustive, CASA provides an official high power rocket safety code in Appendix E of the Advisory Circular on Unmanned Aircraft and Rockets.

Operators should follow this code to ensure the safe use of Australian airspace, as well as ensuring they are compliant with the relevant requirements under the Civil Aviation Safety Regulations.

5. Concerned or unsure about the law applicable to your vehicle?

Seek the advice of a lawyer who specialises in aviation law and/or space law.

Learn more about the Australian space licensing regime and the required licences and permits to authorise your space activities.
Read more

Whatever you’re wondering, share it with us.
Your contribution plays a key part in the continual development of content for this site.

Let us know your email address if you would like a reply.